Why so many NYC buildings boast tin ceilings 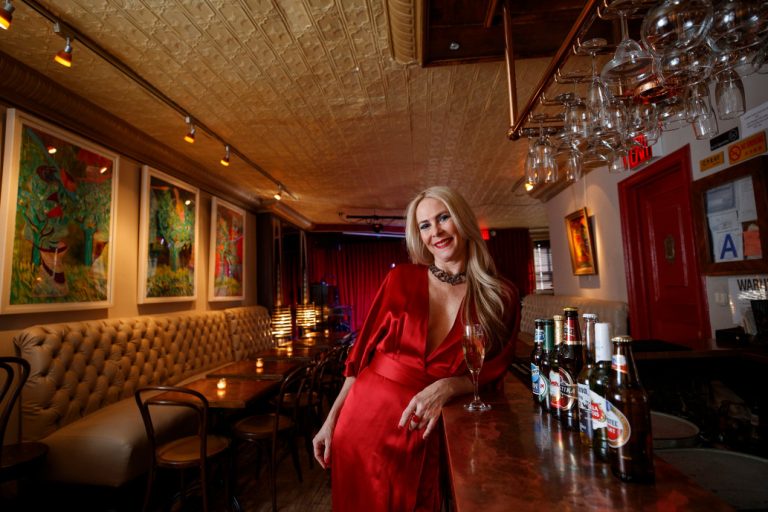 New York’s most beloved architectural innovation might be among its most overlooked: the humble tin ceiling.

Today, people view the geometrically embossed covering with rosy nostalgia. But tin ceilings came of age in industrial Soho and other downtown neighborhoods in spaces ranging from shops and factories to the secret lairs of anarchists. From the 1850s onward, developers erected cast-iron facades along southern Broadway, which provided a cost-effective way for architects to provide elegance on a budget. (The alternative was expensive stone, like limestone or marble.)

Inside these buildings, tin ceilings similarly proved to be a less expensive, more durable — and fireproof — replacement for plaster. Soon, the Broadway shopping district became a destination for both well-heeled New Yorkers and out-of-town visitors. And while cast iron never really caught on outside the city, tin ceilings — which could be ordered by the roll from catalogs from manufacturers in the city — soon swept the nation.

Tastemaker John Derian, 56, the decoupage artist and home decor expert, has tin ceilings in both his East Village shop at Six E. Second St. and his nearby apartment. The reaction wasn’t always positive: “When I first opened the store 24 years ago,” he says, “I’d hear either ‘Charming!’ or ‘Ugh, tin!’ ” Today, however, he notes that reactions are “all positive.” When he moved a wall in his eclectically designed one-bedroom apartment, for example, he “added some tin molding to the room to make is seem like it was always there.” The modular nature of modern tin ceilings makes it easy to “add and subtract” new pieces.

Art historian, author and former contractor Jonathan Lopez, 49, who has worked with both modern and vintage pressed-tin ceilings, points out that the ceilings today are much easier to install than in the material’s heyday, when teams of workers had to lift heavy rolls. Lopez also notes that “tin” is a bit of a misnomer: “Old tin ceilings were actually ‘tinned’ ceilings,” which means that “they were made of steel coated with an amalgam of lead and tin to inhibit rust.”

In the building trades, this material was generally called “terne metal.” Now, of course, lead is absent from panels, which “now use a galvanized coating of almost pure tin” over steel.

Whether it is newly installed or historically preserved, decorative metal makes a good investment. Joel M. Goldstein, 62, an orthopedic spine surgeon, and Melissa Smith-Goldstein, 59, an author and instructor at Rutgers Business School, have listed their two-bedroom, one-bathroom co-op at 223 W. 21st St. on the market for $995,000 with Josh Rubin of Douglas Elliman. (It went into contract on March 25 after 111 days on the market).

While traditional tin ceilings were painted white, the bathroom of their apartment features a pressed metal ceiling that shines. After finding minor damage, they had “the entire area scraped and sealed” and “it has been maintenance-free since” making it the perfect material for a muggy WC. Smith-Goldstein says the ceiling is their “favorite feature of the apartment.” Combined with an “exposed brick wall, it straddles the boundary between old-world charm and modern design.”

This allure means that tin is sometimes installed during recent renovations. Tin wasn’t a common feature in 19th-cenutury single-family townhomes, but it now lines the kitchen ceiling at 131 W. 69th St., repped by Elliman’s Dexter Guerrieri and currently listed for $8.65 million. Brilliant unpainted pressed copper ceilings were added by the current owners in 2001. Not only is a ceiling like this “retro chic,” Lopez says, but it harkens back to an era when “surface ornament was prized, not disdained.”

If embellishment is what you’re looking for, another place to find it is out in Greenport, on Long Island’s North Fork. There, a charming home at 218 South St. — on the market for $649,000 from Janet Markarian at Daniel Gale Sotheby’s International Realty — not only has pressed tin ceilings in the living room but pressed tin walls, too. Once owned by Walt Whitman’s sister, Mary Elizabeth Van Nostrand, the home played host to the famed poet when he was working on “Leaves of Grass.”

Closer to home, it’s not unusual to find original tin decor in buildings around Soho and Tribeca where the technique first took root. What is allegedly the oldest tin ceiling in the country is housed in the upscale Ingo Maurer lighting store at 89 Grand St. Today, only a portion of the original 1877 ceiling is visible in the showroom. But what can be seen demonstrates the appeal of tin: At least five distinct designs repeat in patterns that have been pressed into the metal to form an exuberant crown molding. Tin ceilings weren’t just economical and durable — they were fun.

Often, they are found in buildings that weren’t intended as residences but have since been converted. Brown Harris Stevens is marketing a loft in a former industrial building at 142 Duane St. ($3.19 million) that has original tin ceilings throughout much of the space — so does a loft at nearby 39 White St. ($3.39 million from Tamir Shemesh at Douglas Elliman). Though these are less ornate than what might be found in a home or store, they served another purpose: fireproofing. Though less expensive than ornate plaster, Lopez explains that “it had a fire rating equivalent” to it, which made it ideal for the manufacturing spaces that then occupied so much of the neighborhood.

You don’t need to be in the market for a new home to enjoy the tin aesthetic. Famed ice creamery Ample Hills is moving into the renovated fireboat station in Dumbo’s Brooklyn Bridge Park at the foot of Old Fulton Street this summer. When the shop opens, visitors can enjoy mouth and eye candy surrounded by tin ceilings and another rare tin-wall specimen.

Looking for something with a little more kick? Try KGB Bar at 85 E. Fourth St. The building dates from 1838 and was renovated in the 1880s, which is when general manager Lori Schwarz believes that the tin ceilings were added.

Today, each ceiling is painted, says Schwarz, including in the Red Room, a “speakeasy complete with a copper bathtub but was the headquarters of Emma Goldman’s Secret Society of anarchists in 1914.”

Turns out the truth about tin ceilings is that New Yorkers of all stripes — from poets to shopkeepers to radical activists — really do exist under one roof.

5 Comedy Shows to Catch in N.Y.C. This Weekend

Going Back to the Jazz Age at the Red Room