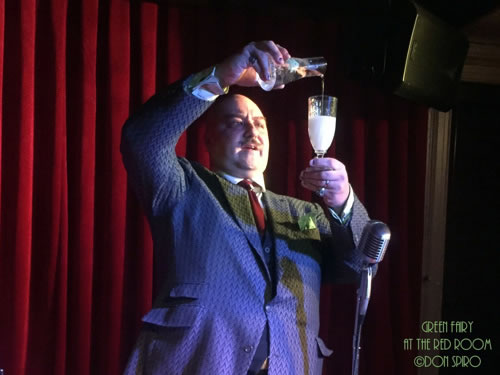 The Red Room above KGB— the former black box that you were probably dragged to by college friends doing DIY theater in the early aughts— has become a swanky, prohibition-themed bar. Every bit as tuxedo as the KGB is shirtsleeves, it boasts warm lighting and art deco details, with a tiny stage and a copper bathtub. “The Green Fairy” event showcases a monthly absinthe tasting paired with era-appropriate entertainment: August’s episode features live piano by Chris Johnson, absinthe history by Kellfire Bray, and Nelson Lugo on the Victrola during breaks. Ticket prices drop for those in “vintage, evening wear, unmentionables or intimate attire,” encouraging you to help create the ambiance.

We caught up with producer Don Spiro to get inside the cat’s pajamas, and also checked in with T.A. Breaux, founder of Jade Liqueurs and arguably the enthusiast most responsible for the revival of genuine absinthe. A scientist, he spearheaded reverse-engineering found bottles of original 19th century absinthe, sharing his research and helping give rise to the diverse current marketplace.

BB_Q(1) T.A. Breaux: Why do you think absinthe was so scandalized.

BB_A(1) Absinthe was scandalized for two reasons: (1) An absence of food and beverage quality control laws paved the way for cheap, adulterated brands to infiltrate their way through the lower classes and alcoholics of France, and, (2) this problem was exploited by opposing economic interests (e.g. wine lobby) who aimed to smear the entire category. The problems that caused such debate in France were never realized here in the U.S. or other nations, simply because the cheap, inferior products that tainted the French market were not articles of export. With the regulations in place today, a repeat of disasters such as the London gin craze or the bad absinthes of France are unlikely.

BB_Q(1) Don Spiro seems bent on spreading the gospel. Why are absinthe enthusiasts so serious about it?

BB_A(1) Absinthe enthusiasts are serious about it because they have an appreciation for the culture that embraced the spirit during the Belle Époque (beautiful period), and like me, they know the truth and aim to set the record straight. They walk the path of the righteous. Now that we are well along the curve in the global classic cocktail renaissance, knowledgeable bartenders are also on board, having realized that absinthe was used in a plethora of classic cocktails. As such, once upon a time, every bar fit for a gentleman had bottles of quality absinthe on its shelves. After the rash of artificially dyed, flavored vodkas posing as absinthe that littered the global market as recently as ten years ago, the past few years have witnessed the rebirth of properly distilled, good quality absinthes.

BB_Q(1) Don Spiro: Same question, why are absinthe enthusiasts so serious about it?

BB_A(1) Absinthe has a taste like licorice and, just like licorice, not everybody likes it. But people who do like absinthe, love it. For a long time it was banned in the US and that led to a lot of dark, mysterious, and very inaccurate lore surrounding the Green Fairy, as it was called. Because it has this strange, outlandish reputation caused by a history of misinformation, absinthe enthusiasts like myself just want to set the record straight.

It’s a liquor like any spirit, so we are serious about it in the way whiskey fans are dedicated to whiskey or wine aficionados are zealous about wine.

BB_Q(1) You’re also a creator of Wit’s End, and have partnered with Dances of Vice. What’s your goal in advancing the Jazz Age scene?

BB_A(1) My partner at the time, Diane Naegel, and I wanted to go to parties with live hot jazz, swing dancing, Prohibition era cocktails, and a speakeasy dress code, and no one else was doing it on a regular basis. Dances of Vice had initially done that, but it quickly transformed into large scale, spectacular anachronistic events. Wit’s End was a party that we wanted to attend but couldn’t unless we did it ourselves, and it caught on. After running Wit’s End for seven years, that community has grown so much that I can hear early 20th Century jazz live almost any night of the week, and the craft cocktail scene has made it so I can even find a rye Manhattan or a French 75 in any dive bar. Wit’s End is not the only reason for that, but it played a significant part.

BB_Q(1) What’s your favorite environment or method in which to consume absinthe? Do you take absinthe-specific vacations?

BB_A(1) I love the speakeasy vibe. I’m fortunate that Wit’s End was at Flute champagne bar, and that the Green Fairy is at the Red Room. Flute was a midtown speakeasy in the Twenties, Texas Guinan’s Club Intime, and the Red Room is above KGB Bar, which was mobster Lucky Luciano’s Palm Casino during Prohibition. But I don’t need any special setting to drink absinthe, I like to think of absinthe just like any other spirit: gin, whiskey, tequila, etc. If it’s not in a particular cocktail, I prefer it simply diluted with ice-chilled water, it has too much alcohol to drink neat. I never add sugar, and never light it on fire.

I haven’t visited any absinthe distilleries yet, but whenever I go to a new city or new bar I always ask to see what kind of absinthe they have, if any. And I go to Tales of the Cocktail, an annual cocktail convention in New Orleans, which is a big town for absinthe and its fans.

BB_Q(1) I remember when the original Rubulad parties in Williamsburg were selling homemade absinthe—it seems to thrive underground. Have we lost something by having it legal?

BB_A(1) I love the idea of an underground speakeasy, it adds to the allure and gets people interested in experimenting, and homemade batches are still around, but having legal product is the best thing to happen to someone who likes absinthe, or any part of cocktail culture. For many people, it was the first chance to have the real deal. Homemade absinthe tends to have the right ingredients, anise, fennel, and grand wormwood, infused in a high proof, neutral spirit. It may taste great, it may taste like moonshine, and it may be poisonous, but it’s really just flavored vodka. Authentic absinthe starts with those three ingredients, macerated in a neutral spirit and redistilled into a clear, flavorful liquor. Traditionally, it is then infused with other botanicals that give it more depth and a greenish hue. Depending on the amounts in the recipe, and what kind of botanicals are used, each absinthe brand has its own variation in flavors, texture, and color.

An interesting fact about absinthe is that it was never technically illegal. The ban was because the government set restrictions on the levels of specific harmful compounds found in absinthe. In the 2000s it was proved that neither pre-ban absinthe nor modern absinthe ever had enough of those compounds to meet those restrictions.

These interviews have been edited and condensed.

Bradley Spinelli is the author of the novels “The Painted Gun” and “Killing Williamsburg,” and the writer/director of “#AnnieHall.”

Going Back to the Jazz Age at the Red Room

Why so many NYC buildings boast tin ceilings

5 Comedy Shows to Catch in N.Y.C. This Weekend